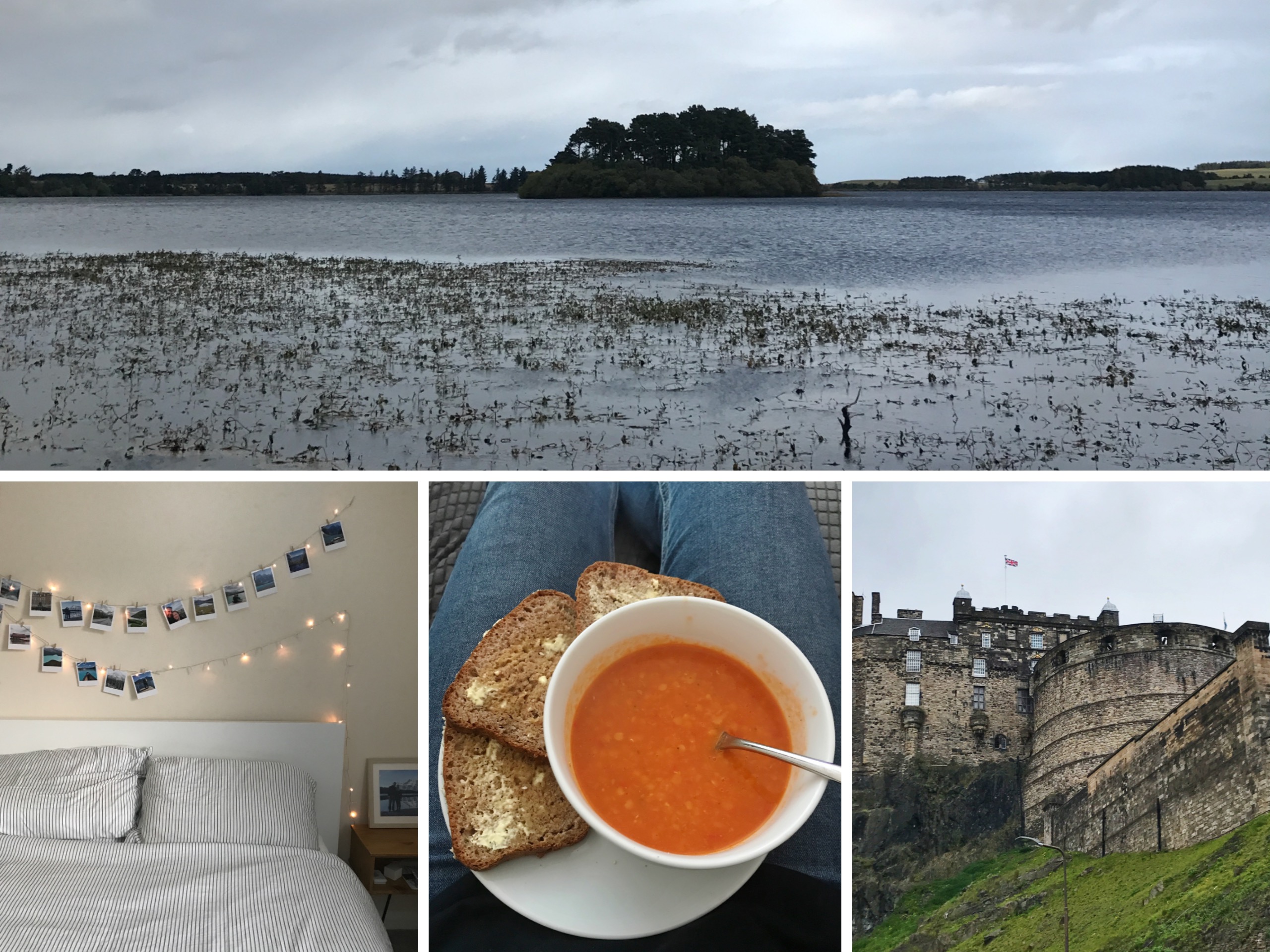 Are you fed up of hearing that autumn is finally here yet? Ok, I won’t say it – but I’m definitely thinking it and I’m really excited about it.

September was our first full month living in Edinburgh, and it’s been a great month. We’re getting our bearings, are loving living here, work is good, and my masters is equal parts fascinating and horrifying. NB: we’re fudging the planet big time and need to stop being dicks to it.

In September, I decided to give being fully vegan another go and it’s going really well so far. We’ve made some delicious vegan food, like soup and butternut squash “mac n cheese”.

Blog – What Is Maria

I found Maria’s blog towards the end of September and it fast became a favourite. Maria covers a range of topics, such as vegan food and recipes, anxiety, and overcoming exercise addiction to name a few.

What drew me to her blog was how absolutely honest it feels. It feels like you’re talking to her in person. She isn’t trying to be someone else at all. My favourite blog post from September was her top 10 vegan pantry essentials.

September was an amazing month for new music.

Our TV signal is rubbish where we live, so Daz and I have been watching a lot of Friends re-runs and documentaries on Netflix / iPlayer. We really enjoyed BBC’s Life at the Extreme, Chasing Coral (it’s a hard watch), and being the Canadaphiles we are, we chuckled hard at Being Canadian.

Like most of the UK, we are pretty undecided on our feelings towards Channel 4’s Great British Bake Off. On one hand, it’s a baking show; what isn’t to love. On the other hand, it belongs on BBC and WHERE’S IS MARY BERRY?! At least it isn’t as bad as the reboot of Top Gear.

Popular posts on Girl In Awe

What did you enjoy in September?

Vinyl Diaries: Paramore – All We Know Is Falling

anaturevoyage
•
Follow
I can’t believe we saw orcas, and so close to home! This pod of orcas have been seen off the coast of Fraserburgh for the past couple of weeks. I still didn’t want to get my hopes up, thinking we’d be lucky to see anything. The pod were right there as we arrived. It was so nice to see so many people out watching them. I’ve wanted to see orcas for years, and thought I’d have to travel to Shetland to even try to see them. If you live around NE Scotland, get yourself over to Fraserburgh - who knows how long they’ll be about for. #Fraserburgh #VisitABDN #Aberdeenshire #MajesticABDN #Springwatch #Cetaceans #ThisIsScotland #BritishWildlife #KillerWhales #Orca #Orcas #ScottishWildlife #Sigma150600 #ShareMySigma #BBCWildlifePOTD #NEScotland #WildlifeWatching #WhaleWatching #WhalesOfInstagram
View on Instagram |
1/9

anaturevoyage
•
Follow
❤️ Crunchie-munchie, 2009 - 2022. It’s taken me a while to figure out what to say because nothing feels good enough. I also didn’t want to write this and have it be real. When I brought a small black and white ball of fur home, just after my 16th birthday, I had no idea how much he would change my life (swipe for a photo of the day I got him). For almost 14 years, Crunchie was by my side every day, making me smile and keeping me company. He instantly turned @dazlarr66 into a cat lover. My favourite time of the day was when we’d finish dinner and put Crunchie’s favourite pink blanket on our laps. He could HEAR that blanket being opened, and he’d come trotting in and sprawl out all over us, getting all the pets and treatos until it was bed time. I looked forward to it every day. When working from home started, I realised just how important his company was. He kept me going, trampled my keyboard, purred so loud in meetings that people couldn’t hear me talking, and stuck his butt to the camera so many times. He made himself a lot of friends without realising. So many people would ask how he was. The house feels weird without him. I knew I spent most of my day talking to him, but I didn’t realise quite how much. No more “hey beast, what are you up to?” or “oh, that’s a big stretch for a little kitty.” Turns out, I don’t want my work to be safe from being trampled over by a cat. I’d love for him to come stick some random characters in my R code. Crunchie was a character. Always comfy, always happy. He was never the “oh watch out for the cat, he hates people” kind of cat. If he got to know you, he’d probably like you. He was pretty chill. Please hug your fur friends tight and give them all the treats. We never get enough time with our fur friends, and I desperately wish we could see him again. Thanks for picking me Crunch, it was an honour to be one of your humans. Sleep tight, little buddy, I’m sure you’re comfy.
View on Instagram |
2/9

anaturevoyage
•
Follow
On this Earth Day, I’ve written a blog post [link in bio & stories] about my thoughts dealing with doom scrolling all the bad nature news by getting excited about nature by learning more about it and seeing it. Fill up your nature awe-cup friends & don’t forget to share that wonder & passion with others 💙. If you want to make your Instagram less doom-scroll, and more “OOF, NATURE IS AMAZING”, here are some of my favourite UK-based Instagram nature accounts: @lucy_lapwing @eilidh__cameron @jonvhillman @hardie_stuart #Fowlsheugh #RSPBFowlsheugh #Aberdeenshire #VisitABDN #Guillemots #Seabirds #BritishNature #ScottishBirds #NatureNerd #EarthDay #OurEarth #RSPB_Love_Nature #BBCWildlifePOTD #ShareMySigma #Sigma150600 @canonuk #BBCEarth #Birding #BirdsOfUK #UKNature #365DaysWild #Stonehaven
View on Instagram |
3/9

anaturevoyage
•
Follow
🕵️‍♀️👁 Came across this beauty the other day, on the gorse by Newburgh beach. Hadn’t a clue what it was. I was searching “what looks like a dragonfly but only has one pair of wings” and getting nothing useful. I shared a photo to my story asking if anyone knew what it was, and @josh_ecology came through with Ophion. I had never heard of that before, so let me tell you some things I’ve learned about them. 1️⃣ They’re wasps. Yup, really. It’s a group of parasitic wasps called Ichneumonidae. 2️⃣ Wanna know what they lay their eggs in? Caterpillars. Nature is metal. 3️⃣ They’re nocturnal - no, I don’t know why this one was out in the day. #Ophion #ParasiticWasp #UKWildlife #UKNaturev #Ichneumon #Ichneumonidae #Wasps #NatureNerd #MacroNature #Aberdeenshire #NatureLovers #BritishWildlifeHub #Raw_Insects #InsectsMacro #BBCWildlifePOTD
View on Instagram |
4/9

anaturevoyage
•
Follow
Was gardening this afternoon, when we saw a grey blur fly at one of our robins. I saw the unmistakable black and white striped tail of a sparrowhawk as they flew into the trees. We’re not sure if the sparrowhawk was successful or not. We regularly see two robins, and occasionally three at the same time, so it’ll take us a few days to figure it out. On one hand, I’ll be gutted if one of “our” robins has been chomped; on the other hand, a sparrowhawks gotta eat. Circle of life. #Springwatch #Gardenbirds #Robin #Erithacusrubecula #Bird_Brilliance #EuropeanRobin #InstaNature #BirdPortrait #ShareMySigma #Sigma70300 @canonuk #EuroBirdwatch #BirdNerd #Birding #GardenNature
View on Instagram |
5/9

anaturevoyage
•
Follow
Is anyone else slightly envious of how stylish guillemots look? I know I say a lot of birds are beautiful (they all are, apart from cuckoos, they creep me out and cannot be trusted), but guillemots are right up there. Now is a good time to spot them, as they’re coming ashore for breeding season. You can find them on cliff edges (the RSPB has a good map showing where they are in the summer), but please don’t get too close for your own safety & to avoid spooking the birds. It’s a spectacle seeing, hearing, and smelling thousands of birds squashed into the cliffs. If you’re in / around Aberdeen, I recommend visiting RSPB Fowlsheugh. #Guillemots #RSPBFowlsheugh #Aberdeenshire #BeautifulABDN #ThisIsScotland #Springwatch #NatureNerd #DiscoverWildlife #ShareMySigma #Sigma150600 @canonuk #BBCWildlifePOTD #Birding #BirdNerd #Guillemot #Seabirds #RSPB_Love_Nature #UKNature #BritishBirds #BestBirdShots #ScotlandsBeauty
View on Instagram |
6/9

anaturevoyage
•
Follow
The eider duck is our heaviest and fastest flying duck, here in the UK. I reckon they might be one of the most beautiful, too. They have such a great call - it sounds like an “ooooh”. Think almost like Kenneth Williams’ trademark “ooooh, matron.” 1st photo: male eider duck. 2nd photo: female eider duck. 3rd photo: juvenile eider duck. In the UK, they’re resident around the coasts in Northern Ireland, Scotland, and northern England, and can also be seen in the winter along the coasts of England and Wales. #Eider #EiderDuck #BBCWildlifePOTD #ShareMySigma #Sigma150600 #BeautifulABDN #ScottishWildlife #DiscoverWildlife #BirdPerfection #BritishWildlifeHub #YourScotland #SciComm #LearnAboutNature #BirdNerd #Birding #GreyhopeBay #Girdleness #Aberdeen #AberdeenHarbour
View on Instagram |
7/9

anaturevoyage
•
Follow
Take a look at this beautiful male chaffinch. Isn’t he stunning? They’re so fun to look at because there’s just so much going on; rusty chest and cheeks, blue-grey head, black wings with white accents, and if you look closer you’ll also spot a bit of yellow on the wings too. We have over 6 million pairs of chaffinches in the UK. They can be seen in woodland, farmland, parks, and gardens, so they’re a nice one to start learning to identify if you’re new to birding. The @woodlandtrust website also says chaffinches have regional accents. BRB, going to see if I can find out what a Black Country chaffinch sounds like. #Chaffinch #BritishBirds #Sigma70300 #UKWildlife #NatureLovers #BirdNerd #Birding #SciComm #WildlifeOnEarth #Springwatch #FyvieCastle #Aberdeenshire #DiscoverNature #ScottishWildlifeTrust #EnjoyNature #ipreview via @preview.app
View on Instagram |
8/9

anaturevoyage
•
Follow
🍞LOAF CHECK! Loafing isn’t just for cats, y’know; birds can be excellent loaves too. I give this puffin a 9.5/10. Looks like a nice, fluffy, firm loaf, but I can see a bit of foot, so they lose half a mark for that. How do you rate this loaf? We should have an annual Wildlife Loaf bracket; loaves of all species going head to head like Fat Bear Week. #Puffin #RSPBFowlsheugh #Fowlsheugh #NatureOnOurDoorstep #BeautifulABDN #Aberdeenshire #ScottishBirds #Seabirds #ThisIsScotland #BBCWildlifePOTD #CoastalBirds #DiscoverNature #BritishWildlife #NatureOnOurDoorstep #Stonehaven #ICU_Scotland #NaturePhotography #Birding #ExploreScotland #BeautifulScotland #NatGeoWild #Nature_Perfection #Sigma150600 #CanonUK @canonuk #UKWildlife #TheBritishWildlife #LoafCheck
View on Instagram |
9/9
View on Instagram