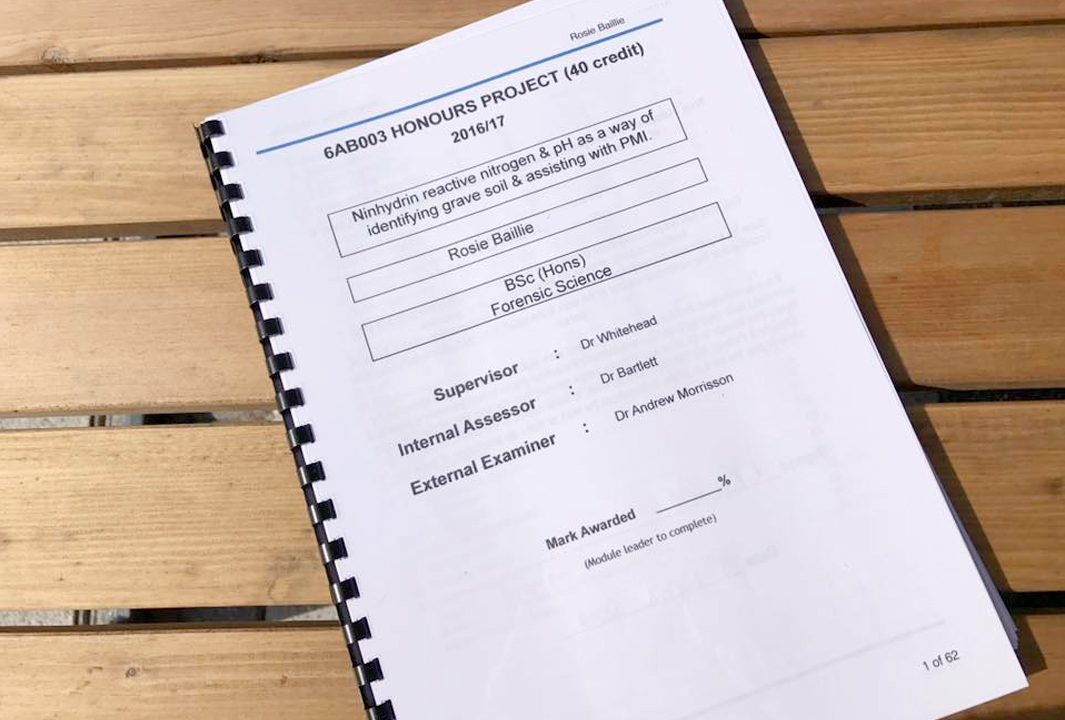 Last Friday, I got the news I’d been impatiently refreshing my emails for; I have finished my forensic science degree with a first.

I’m not going to lie, I am pretty proud of myself. I started university about six years ago now and dropped out after a year and a half because I wasn’t really sure what I wanted. After three years out I realised I loved science and applied to go back pretty much exactly two years ago.

It was nerve-wracking taking a pay cut and starting a part-time job but that hasn’t been as hard as I feared. My part-time job introduced me to a group of people who feel like family to me now; I have made friends for life and I hate to think what my life would be like without them.

I have worked hard and I’ve had amazing support from Daz, my friends and family. University is not something you can do on your own, you need a little bit of help, whether it’s someone making dinner when you’re furiously typing away, asking a friend to quiz you for an exam, or trying to explain your ideas or thoughts to someone who doesn’t really know what you’re on about – a different perspective can so often pick up something obvious that you’ve missed. (I tell you, I could have cried when Daz pointed something really obvious out about my dissertation project that I had completely missed.)

By far, the dissertation was the biggest challenge but it taught me so much. That said, I had no idea how I’d done by the time I handed it in and was convinced that because it was a double module I’d sabotaged my shot at a first. You know what it’s like when you spend so long on something and you have no idea if it’s good or a load of rubbish anymore. I am over the moon with a first, and I had no intention of getting anything less than a first when I decided to go back.

Annoyingly, my university doesn’t do graduation until September (I have no idea why) so I won’t actually get to go to graduation. The idea of a graduation ceremony did make me feel pretty nervous but it also felt like a chance to celebrate hard work.

I guess the moral of this story is don’t let yourself hold yourself back; if you want something, go out there and get it. I think there might be a second moral which is; you don’t have to go to university right after 6th form or college, and it might not even be for you anyway – don’t listen to lecturers or teachers who tell you you have to or should go, it’s your life.

14 Reasons why Canada is making me wish my life away

Living healthily & ethically should not be a privilege

anaturevoyage
•
Follow
🌳 What’s your favourite thing about trees? For me, it’s how many different shades of green they come in. Sure, maybe they all look similar but there are subtle differences. Trees are truly incredible for all kinds of reasons. One of the things that fascinates me is the effect trees have on humans. Studies have shown that being around trees have a calming effect, and are even linked to lower blood pressure. How amazing is that? #IsleOfMull #ArosPark #NatureTherapy #TreesTreesTrees #Treescape #ForestBathing #SpiritOfScotland #VisitMullAndIona #IsleBeBack #NatureNerd #GetOutside #ipreview via @preview.app
View on Instagram |
3/9

anaturevoyage
•
Follow
🌲Here’s one for those of you who also read young adult fiction: forests make me let out a breath I didn’t know I was holding in. I’ve been having a hard time with my ADHD since we got back from the west coast; my concentration has been awful, and I’ve been getting frustrated with myself. But as soon as I got out the car at Uath Lochans, I felt myself properly relax. I guess we need to buy a house in a forest, eh @dazlarr66? Though I spend a lot of time walking in my local area, this misty walk around Lochans and through the forest scratched my “omg, how many trees can I see right now” itch that I can’t quite scratch on a walk from my house. #UathLochans #Kingussie #Aviemore #RespectProtectEnjoy #CairngormsNationalPark #ThisIsScotland #ForestWalks #MistyWalk #WalkHighlands #ScottishHighlands #HighlandsAndIslands #NatureTherapy #GreenTherapy #GreenScotland #UKPOTD #FarleitterCrag #GetOutside #ScotlandShots #ScotlandLover
View on Instagram |
4/9

anaturevoyage
•
Follow
You can just enjoy this fly sitting on some delicious looking blackberries, or read on for a wee frustrated note. It seems genuinely 🦇💩 to me that I’m trying to do my job while the world continues to face so much loss and heartbreak (1/3rd of Pakistan is under water!), while we’re sleepwalking into an even worse cost of living crisis in the UK. Over the summer, I’ve been spending my non-trying-to-work hours helping organise national and local campaigns for PhD students because our stipends (which are designed to cover our costs of living) aren’t keeping up with inflation. I’ve had discussions about not turning the heating on at all this winter in poorly insulated homes; people saying they have to use the heating for health conditions otherwise they’ll be in more pain but don’t know how they’ll afford it; talking about us crafty folk making hats, socks, fingerless gloves etc to donate to our friends & colleagues to help them keep warmer in their cold homes. Wtf?! This is absurd. It’s hard to actually focus on my research with all this hanging over me. I’m fed up of inaction from those who make decisions. What will it take for decision makers to want to treat people fairly and with dignity, instead of focusing entirely on the money? #Blackberries #WildFruit #EnoughIsEnough #CostOfLiving #PhDStudents #PhDJourney #BlackberryBush #Brambles
View on Instagram |
5/9

anaturevoyage
•
Follow
Spent a wonderful 10 days with @dazlarr66 & @jasperscattails over on the west coast, revisiting one of our favourite places (Clachtoll) and visiting a new favourite place for the first time (allll of Mull). Anyone else come back from a trip and find themselves questioning their life decisions? I think I’d enjoy island life. I know it wouldn’t be the same as living in a city on the mainland, and there would undoubtedly be things I’d miss or find frustrating, but I’d love to live on a smaller island. Currently trying to figure out how and if we could make that happen post-PhD. This photo was the view from otter spotting on our final night on Mull. I got chomped by midges taking this photo, but the itchy forehead was worth it. We didn’t see any otters but the flat water and glowing light was a spectacle in itself. #IsleOfMull #VisitMullAndIona #InnerHebrides #Salen #SalenBay #ThisIsScotland #HiddenScotland #HighlandCollective #ScottishCollective #WildAboutArgyll #ExploreMore #BeautifulDestination #MagicMoments #LoveScotland #Hebrides #MyCanon #BBCEarth #UKPOTD #IG_Scotland #ipreview #WildlifeWatching
View on Instagram |
6/9

anaturevoyage
•
Follow
Everyday I’m shovelin’…The shoveler (or northern shoveler, as they’re called in some places) is unmistakeable thanks to it’s HUGE bill. Imagine the neck muscles they must have to lug that big ol’ bill about. But why do they have such a big duck snoot? Because it’s a kind of colander. Shovelers have something called lamellae on the inside of their bill (they look like the teeth on combs), which helps them to filter out tasty snacks (aquatic invertebrates and teeny crustaceans) from the water. The bigger your colander bill is, the faster you can get more food. Makes sense right? #Shoveler #NorthernShoveler #Birding #BirdNerd BritishBirds #RSPB_Love_Birds #NatureNerd #SciCommer #Sigma150600 #LochLeven #Kinross #BBCSpringwatch #MySigma
View on Instagram |
8/9

anaturevoyage
•
Follow
It’s #InsectWeek22, so let’s talk about this burying beetle that landed on the roof of my grow house last night. Specifically, I think it’s a common sexton beetle (Nicrophorus vespilloides) due to the black antennae tips. Anyway, on to the gory stuff. These beetles are attracted to the scents given off by dead and decaying bodies (things like birds and small mammals). Males and female find each other and pair up ON dead animals. The female lays her eggs next to or ON the corpse, providing their young with a delicious and nutritious food source. Mmmm, baby food doesn’t seem so bad now, does it? I’m not finished though, and I’m about to use the phrase “anal secretions”. Say you’ve got a decomposing mouse corpse that you want to feed to your kids in a few days but you don’t own a fridge - what’s a beetle to do? Cover it in antibiotic anal secretions of course! While it might sound gross to some, these metal wee beasties are doing a great job by decomposing corpses and returning the nutrients to the soil. I have no idea why this one was on my growhouse, unless it was a vegetarian carrion beetle after some dead plants… #CarrionBeetle #InsectWeek #CommonSextonBeetle #BritishNature #WholeLottaBugs #WildlifeOnEarth #Silphidae #NatureIsMetal #NatureNerd #BuryingBeetle #BeetlesOfInstagram #Entomology
View on Instagram |
9/9
View on Instagram