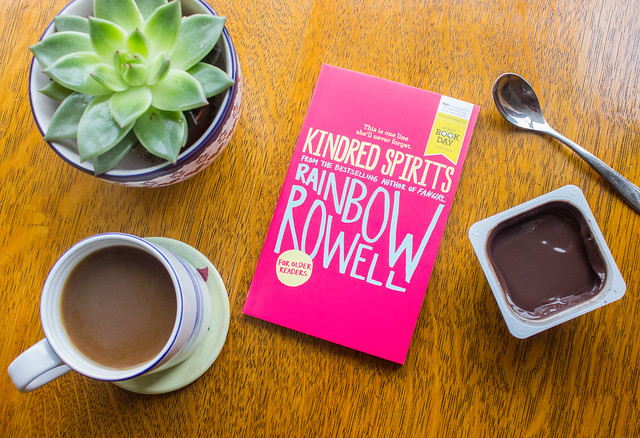 How does Rainbow Rowell do it? How does she pack so much awesome and detail into so few pages? I’m convinced she’s a wizard / witch.

Kindred Spirits is a 62-page release from Rainbow Rowell especially for World Book Day 2016. It seems that it’s currently exclusive to the UK, though I’m sure I saw her say somewhere (I can’t remember if it was Twitter, or an interview) that it will be released elsewhere next year.

I apologise if you do not live in the UK because I’m going to do a whole load of fangirling and you’re probably going to hate me. Sorry, but fangirling about Rainbow Rowell’s books about fangirls is what I do.

Elena is a Star Wars fangirl, and Kindred Spirits is set in the line outside a cinema in Omaha as she queues for four days to see the latest Star Wars movie.

I’m pretty late to the Star Wars party. I saw the latest film last December, but I haven’t seen the rest of them in their entirety (shhh, don’t tell anyone) but it doesn’t matter. Whether you’ve seen them all or none of them, you can still enjoy Kindred Spirits to it’s fullest. The spirit of the book is really about being passionate about something and sharing that passion – which I’m sure we can all relate to.

On top of that, there’s a lot of fangirling and bonding with strangers over a mutual love of something – which I’m sure many of us can relate to.

We’re quickly sucked into Elena’s world; she’s well developed and has a good back story, as do the other characters. HOW does Rainbow Rowell manage to create such a detailed character in the space of 62 pages?

The only bad thing I can think to say about Kindred Spirits is that it’s not a full story. I honestly feel like this could be turned into a full-length novel where we find out what happens next – because I would love to know what happens next, and I’m sure I’m not the only one.

Perhaps if we all ask Rainbow really nicely, it will happen. Isn’t that how Carry On came about?

In short, I adored Kindred Spirits and I’d definitely recommend it. If you like any of Rainbow’s other books, you’re sure to enjoy this just as much as the rest.

I should note that there’s a snippet of Beautiful Broken Things by Sara Barnard at the back, after Kindred Spirits so while you might see it listed as being 96 pages long, only 62 pages is actually Kindred Spirits.

Since Kindred Spirits was released for World Book Day 2016, I wanted to talk about fond memories of WBD. Who doesn’t remember the excitement of deciding what you’d be?

My favourite WBD memory was when I was about 5 or 6 years old, and I went as Tigger. My Mum painted a bright orange onesie with tiger stripes and made me a tail with a big spring in it. I loved it – I feel like there is a photo of it somewhere, but I couldn’t find it.

Please, tell me about your World Book Day memories.

Crush – Eve Ainsworth* | How contemporary YA should be done

January Roundup + February To Be Read