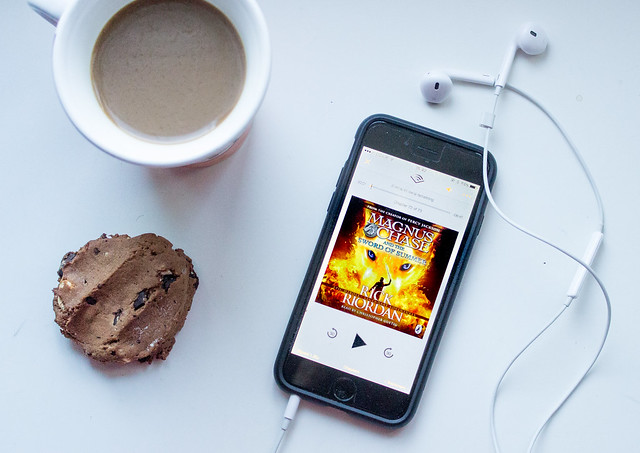 Magnus Chase and the Sword of Summer was definitely a worthy first book to complete in 2016.

I actually started it at the beginning of December. I was in a mega reading slump, depsite having a handful of good books on the go, and I thought that trying out an audiobook might help, so I signed up for an Audible trial. It turns out, audiobooks and me don’t get on too well (that’s a story for another day), but I really enjoyed Magnus Chase and the Sword of Summer.

In November, I finished off Rick Riordan’s Percy Jackson series, and after discovering he was writing a series about Norse mythology, it was a no brainer; I had to read it.

Essentially, Magnus Chase follows the same formula as Percy Jackson; someone discovers they are the child of a god and they have magic powers. They meet some other magic-powered people and set off on quests to do stuff for other people, to find out where other people are who want them to do things for them, to eventually defeat someone evil.

It would have been easy for this series to be a rinse and repeat, but Rick Riordan did a fantastic job of making it stand out on it’s own and creating a wonderful world that I wish I could explore myself.

Why you need to read this book

The only negative feelings I have about this book are that perhaps it’s a little longer than it needs to be. There were points towards the end of the book where it felt like things were being dragged out a little unnecessarily, but it wasn’t a massive annoyance for me. I think it would have been less of an annoyance if I’d read it, because I could have read those parts faster than the narrator read them.

A bit about the audiobook

Since the narration is pretty important when it comes to an audiobook I wanted to quickly touch on my thoughts on that. I wasn’t overly impressed by Christopher Guetig‘s narration, mostly because I felt his voice did not sound like that of a 16-year-old; his narration reminded me a lot of the voice used for the first Percy Jackson book which I listened to. Magnus did not sound like a 16-year-old boy.

I was pretty disappointed with the voice used for Samirah also because he also made her sound really young, but I don’t think he got a great handle on her tone of voice in general. Everything she said was said in exactly the same way, and most of the time it made her sound a bit weak, even when she was saying something she was annoyed about, or being fierce about.

Also, the accents were pretty bad. Especially the Irish one.

I love Norse mythology so if you have any recommendations, please let me know.

Did I Mention I Need You – Estelle Maskame* | YES! I got my book mojo back.

5 types of friends who want to borrow your books

Crush – Eve Ainsworth* | How contemporary YA should be done